Some great reviews and lively audiences at last month’s Fairytale Festival ‘Retold’ prove beyond doubt that women’s theatre can put bums on seats and still be taken seriously. 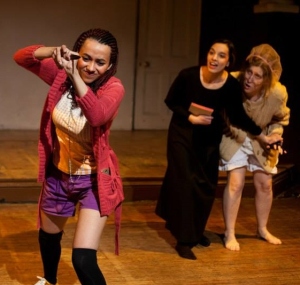 Claire Booker subverted Grimm’s ‘Little Red Riding Hood’ and set all the action inside the belly of the wolf where it’s dark, it stinks and it’s packed with victims. Can Hoodie, Gran and Aisha escape, or should they wait for the Woodcutter?

“‘Little Red Hoodie’ feels like a sudden gem and Natasha Atherton is truly riveting as Aisha, a Muslim woman who wakes up in the stomach of a wolf. This piece of writing engages with a more delicate kind of metaphor and allows a story to be told; one which is very moving. This truly feels like a fairytale done differently, while remaining recognisable.”  ThePublicReviews

“Booker devises a brand new character, Aisha (Natasha Atherton), a devout Muslim who has unexpectedly found herself detached from the rest of her body.

The idea of women being empowered to save themselves comes across in this play and there’s a nice nod to the disparity in generational attitudes, with Hoodie (Tessa Hart) and Gran (Rebecca Peyton) coming to different conclusions.

Tilly Lunken’s play used a reunion of three old school friends queuing up to watch Snow White as a way of dissecting issues of beauty and appearance. “There is a sweetness here and Priscilla Adade-Helledy (Lilly) brings an enjoyable levity to proceedings. Some truly poignant moments show up with wonderful lines like “[Snow White is] a story of never escaping the dreams of your mother.” ThePublicReviews

“The Snow White Complex’ definitely packs a big emotional punch, thanks to the cast but also director Kuba Drewer.” ViewFromTheGods

Amy Bethan Evans ‘As if by a Stair’ used the story of Rapunzel as a fable which illustrates how young people’s futures have been sold down the river of so-called fiscal necessity.  “Whilst the pieces are each completely different and unique, the overall fairytale and socio-critical tone still makes the show feel like one big ensemble project where everyone is very much in tune with each other.” RemoteGoat

Watch this space for more information on Goblin Baby Theatre Company or go to their website at: http://www.goblinbaby.com