Two visits to Guildford in one week and I’ve begun to feel like a poetry commuter! First up I was there for the launch of The Keystone Anthology, which is a roller-coaster of a read. Concrete poetry, free-verse, traditional form, politics, love, humour, anatomical conundrums  and amorous fridges all jostle for the reader’s attention.

Poems in the anthology have been written by the 1,000 monkeys (aka poets who performed at The Keystone or Bar des Arts last year) and is superbly edited by  Janice Windle.

The first edition sold out, but more copies will shortly be available at Dempsey&Windle – books, pamphlets and poems

Surrey’s capital city beckoned again only days later, as I’d been invited by the 1,000 Monkeys to perform a set at the monthly Bar des Arts poetry shindig alongside Elaine Stabler and Hugh Greasley. So it was Clapham Junction (platform 11, swarming with cut-throat commuters returning to roost) and due south to this lovely venue, nestling by Guildford’s Yvonne Arnaud theatre. 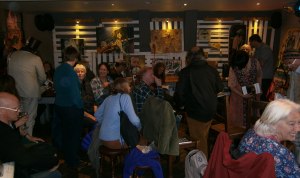 The turn-out was lively and perfectly formed, including some wonderful open mic madness by Alex Twyman, Donall Dempsey and a top-hatted gothic bard. The 1,000 Monkeys meet at 7.30pm every third Tuesday of the month at The Bar des Arts, Weymead House, Milbrook, Guildford GU1 3YA. It’s a FREE event and all are welcome.