The Interpreter’s House – a Celebration 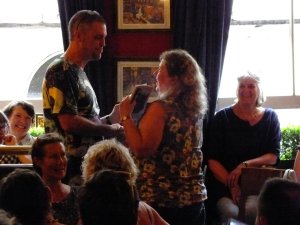 Martin Malone tested the limits of heat endurance when he handed over the keys of The Interpreter’s House on a sweltering night at a packed-to-the-rafters event in Nell of Old Drury, Covent Garden.

Celebrating the end of his five year tenure as editor, contributors from issues 67 and 68 waxed lyrical (and sweaty) during an evening both warm in body and heart. 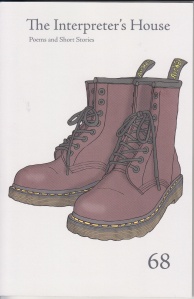 The latest issue includes the winning poem ‘Operation Thunderstorm’ by Theophilus Kwek, as well as poems by people who couldn’t make it to the launch such as Josephine Balmer, Robert Crawford, Katie Donovan, Carrie Etter and Robin Houghton. Plus there’s a powerful story by S.P. Hannaway and reviews by Martin Malone, Aoife Lyall, Dawn Gorman and Declan Ryan.

“Poetry’s background music represents an incrementally important soundtrack to what a society is, and in one of the developed world’s most socially unequal, this is no small thing,” says Martin Malone in his final editorial. Out-going Assistant Editor, Charles Lauder Jnr adds: “The goal was and always has been to accept the best writing – strong, surprising, unique, well-crafted, thought-provoking poems and stories.” 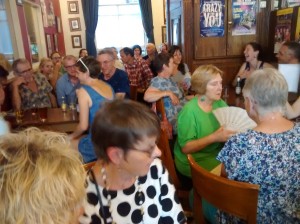 It’s a tough act to follow for new editors Georgi Gill and Andrew Wells, but they’re already on the case. Something like 1,500 submissions will land in their in-tray over the coming weeks, so if you’d like to see one of your poems or short stories in issue 69, check out the website at: The Interpreter’s House 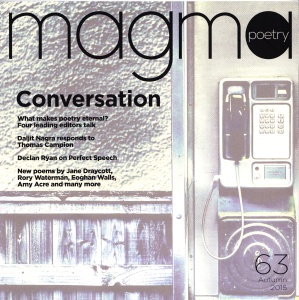 Literary magazines exist to offer  an exchange between reader and author – ideas and inspiration flowing freely between minds.

So bravo to Magma 63’s editors Susannah Hart and Lisa Kelly for their fascinating cache of poems and articles on the gentle (and not so gentle!) art of conversation. Poets in this issue include Sophie Baker, Claire Booker, Jane Draycott, Jody Porter, Robert Seatter, Martha Sprackland, Eoghan Walls and Jackie Wills.

And as part of Magma’s on-going commissions, Daljit Nagra presents his new poem ‘The Look of Love’ which draws on a couplet by lesser known Elizabethan poet, Thomas Campion – “Fairenesse seene in th’outward shape is but th’inward beauties Ape.”

Plus there are some excellent feature articles in this issue. Christine Webb writes eloquently on the experience of having one of her favourite poems (‘Hurrahing In Harvest’ by Manley Hopkins) recorded for her by an actor at The Poetry Exchange. If you’d like to do the same, or would like to listen to already recorded poems, then visit:  www.thepoetryexchange.co.uk

And what about posterity? Is this still a possibility for contemporary poets? Tom Chivers (Penned in the Margins), Amy Wack (Seren), Neil Astley (Bloodaxe) and Parisa Ebrahimi (Chatto & Windus) enter the conversation.

Ambit’s Poetry Editor, Declan Ryan, considers Ian Hamilton’s concept of ‘perfect speech’ and finishes with a poetry exercise: write a poem that says something that should have been said to someone at the time, but who is no longer around.

And of course, there are reviews of some of the latest poetry collections including ‘Citizen’ by Claudia Rankine, ‘Loop of Jade’ by Sarah Howe, and ‘Careful What You Wish For’ by Peter Sansom.

To read some of the poems in issue 63, or to buy a copy, check the Magma website at: www.magmapoetry.com

Ambit 221 – a fruit bowl of art, poetry and short fiction 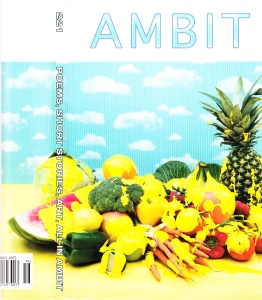 Ambit is looking absolutely luscious this summer – a splash of fruit and veg on ethereal blue and inside some wonderful reading.

Artwork is on top form, with cover and a palate of work by South Korean artist Hyounsang Yoo, who gives insights into her journey as an artist and her working process. The Summer Salon of images is refreshingly diverse, including ‘Cherries’ by Kes Richardson and ‘Fatal Flower Garden’ by Melanie Bonajo. And as an added extra, Jenny Dunseath’s ‘An image, I’m pleased, I am sad’ is available to download from Ambit’s website as an animated .gif.

Plus short fiction lovers can enjoy stories by Dave Wakely, Marcella O’Connor, Tania Hershman and Jonny Keyworth – from insights into scientific nuns and gay parenthood to the melting pot of cultures that is New York.

To buy your copy of Ambit 221, or subscribe to the magazine, visit: