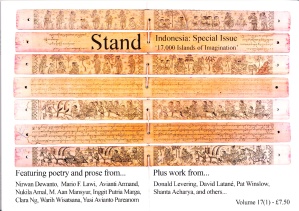 Poetry is a powerful way to connect with another culture. Succinct, deeply felt, immediate – poems reveal new ways of looking, the heart of a people.

According to a fascinating article by John H. McGlynn, “poetry is arguably the most essential of all the Indonesian literary genres, enjoying as it does a status far above that of even the novel.”

The literary traditions of the Malay language (mother of Indonesian) go back to at least 400 AD, and there are exquisite palm-leaf manuscripts in the shape of fans to prove this. The transformation of Malay into ‘Indonesian’, first  proposed in 1928 by members of the Youth Congress, accomplished linguistic unity in a country where more than 600 languages are still spoken today. 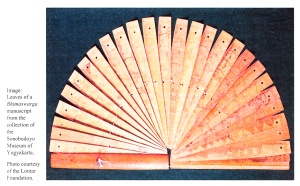 So, it’s a great honour to have two of my own poems published in this issue, alongside other anglophone poets, including Shanta Acharya, Richard Aronowitz, Claire Crowther, Ian Harker, Keith J. Hutson, Sonia Jarema, John McCullogh, Jo-ann Mort and Pat Winslow.

And Stand also includes short pieces of prose from both UK/USA based writers and Indonesian writers, together with reviews of Donald Levering’s ‘Previous Lives’ by David Latane, and Ken Smith’s Collected Poems by  N.S. Thompson.

To buy a copy of Stand Volume 17(1) or to submit work to the magazine, visit: www.standmagazine.org