Dreamcatcher – worth a pile of beans! 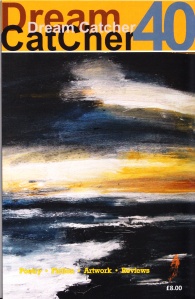 During the siege of Leningrad, people flocked to the libraries for nourishment. Here, we flock to the supermarkets for toilet rolls. Perhaps the Russians have something to teach us.

I’m fortunate (so far) in having food and books enough. And my contributor’s copy of Dreamcatcher 40 has just arrived, pulsating with verbal and visual treats.  It’s Wendy Pratt’s final issue as Editor, and she’s really pushed the boat out.

It includes some cracking short stories: Mark Jarman’s fascinating take on Shanghai; Kevan Youde’s mouth-watering sea voyage; a tale from Down Under by Christian McCulloch and something for Movie buffs from Mark Wasserman.

The ravishing artwork in this issue has been selected from oil paintings by David Baumforth. Born in York, David’s inspiration is the ‘bitter beauty’ of England’s North East coast.  His technique is Turnerian, but the modern visual risk-taker is very much in evidence too.

“I paint how I’ve always painted,” explains Baumforth, “and that’s with a focus on the truth of what I see in front of me. Yorkshire and its coastline are a constant source of inspiration. My last collections are very well received, and though that is gratifying, success or lack of it can be a distraction.”

Wise words indeed. And what fantastic use of colour. Clearly a painter I need to find out more about. So, thank you, Dreamcatcher for introducing him to me.

This issue also carries reviews of Derrida’s Monkey by Nell Farrell, and The Unknown Civilian by Antony Owen. Plus a very handy guide by Alan Gillott to three, on-line resources for writers: Write Out Loud, The Poetry Kit, and Rhyme Zone.

To buy a copy of Dreamcatcher 40, subscribe to the magazine (two issues a year), or check submissions windows, visit: Dreamcatcher

Dreamcatcher 33 – for a ride on the wild side

The latest issue of Dreamcatcher travels down baking highways into  small town America with its drive-in diners, car lots and lonely motels. Thumb a lift in this shining Cadillac of a literary mag and discover poetry and short stories that sit on the edge of dangerous.

There’s a nice range of short stories too. I particularly enjoyed Roger Harveys’ tale of trespassing lovers, Forbidden Fruit, and the excellent Merryn Williams’ chilling  Next of Kin about a woman on a life support machine.

Featured artist Horace Panter’s brilliantly brash work blows right through the issue and is described by Art Editor Greg McGee as: “a pop art homage to what is a Kerouacian yearning to travel to altered states, to adventure, to expand horizons: to remaster, in a sense, the myth of The American Dream.”

To buy a copy of Dreamcatcher 33, or submit to the next issue, please visit: www.dreamcatchermagazine.co.uk