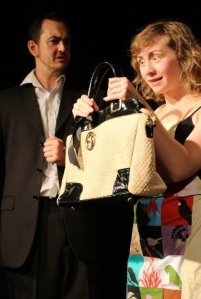 One of our Robots is Missing

Goblin Baby Theatre Co. pulled off  a Camden Fringe Review ‘Hot Ticket’ status for 2 out of the 3 nights’ performances of FORESEEN – its four writer, three actor, two director bonanza of post-apocalyptic dark comedies that played The Hen & Chickens Theatre Bar in Islington from the 22nd to 24th August.

Lucy and the Beasts

Leigh-Anne Abela directed Amy Bethan Evans’ Lucy and the Beasts  (The Beast is what you make of it);  and Claire Booker’s One Of Our Robots Is Missing (Nuclear bunkers. Read the small print!) Victorine Pontillon directed Tessa Hart’s The Appointment (The legend of the Female Species and their mysterious swelling bellies); and Tilly Lunken’s Processed  (There must be somewhere to live, even when there is nowhere to go).

Next up is a Goblin Baby double bill: The Proposal by Anton Chekhov(in a same-sex version) and To Be A Wife by Tilly Lunken at The Space, Isle of Dogs, London from 7th-11th October (7.30pm with 3pm Saturday matinee).  For more details or to buy tickets visit www.goblinbaby.com 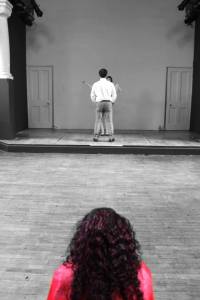 There’s a second chance to see Claire Booker’s drama ‘The Devil and Stepashka’ this weekend, as it transfers to Ye Old Rose & Crown Theatre in Walthamstow.

Inspired by a Tolstoy short story, the play is a thought-provoking tale about passion and its consequences. Landowner, Zhenya, stands trial for the murder of one of his peasants, but can there be true justice in an unjust society?

Goblin Baby Theatre Co. has pulled off another critical success, earning four-star reviews during the play’s two week run last month at The Space, north east London: “Gripping and haunting. Booker’s play is very brave as well as unusual. One of those hidden gems on the London Fringe.” Remotegoat.com. “An intriguing new work.” Viewsfromthegods.co.uk  “The superstitiously secular, domestic world of Claire Booker’s The Devil and Stepashka manages to create a believable male Antigone in what ends up to be very literally one hell of a double-bind.” Exeunt Magazine. 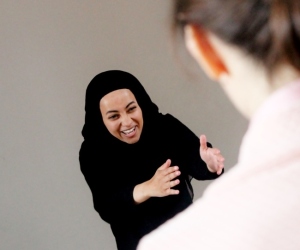 Plaudits for the cast and crew include: “Particularly remarkable were Dimitri Shaw as lawyer Boris . . . and Tessa Hart who portrayed both the haunting presence of the murdered Stepashka as well as her living sister Dasha.” RemoteGoat. 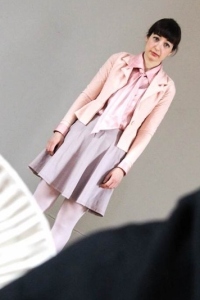 “Lydia Lane is wonderfully precise and pernickety as Zhenya’s doting wife, Lisa. She has the harassed, loving, frantic possessiveness of a woman fearing, but refusing to believe, that she has been replaced.” Exeunt Magazine.  “Overall production designer Christopher Keech is to be congratulated for achieving a varied and detailed design.” RemoteGoat. “Leigh-Anne Abela (director) manages to bring out the intense emotions of this piece, cleverly framing the love triangle between Zhenya, his wife and the memory of his lover . . . leaving us with two passionate individuals, choked by dark desire, spiralling out of control in front of us.” View From The Gods. 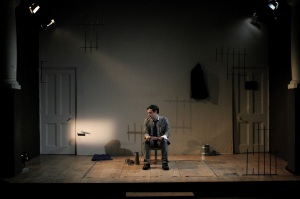