New Drama at the Arts Theatre

Upstairs at The Arts Theatre in Covent Garden is a lively venue with a bar at the back for those of thirsty inclination. Pretty handy during a recent hot May night when upwards of 80 people packed into its bijou space to enjoy new dramas by Claire Booker, Aaron Hubbard, Dean Moynihan and Chris York, plus music by Lescines and Rebecca Vaughan.

My play ‘Blue Line Day’ was directed by Paul Heelis and featured Monty Burgess and Leonora Barton in the roles of Michael and Rachel – a couple who can’t live with (or without) each other.  Thank you to all involved for their talent and hard work which really paid off.

We were also treated to a bravura performance by Alexandra Robinson in Chris York’s ‘Build a Rocket’ offering up the joys (and horrors) of childbirth, whilst ‘The Boy Who Built a Clock’ by Aaron Hubbard made us question our prejudices. And Dean Moynihan’s very clever play within a play, ‘This is This’, had us all wrong footed – several times over.

Paperback Pictures’ bimonthly new writing event, Foot in the Door, showcases work by upcoming theatre professionals. And they’re hungry for more! If you’re a writer, actor, director, musician or theatre technician looking for an audience and a chance to hone your craft, find out how to get involved at:  http://www.paperback.pics/ 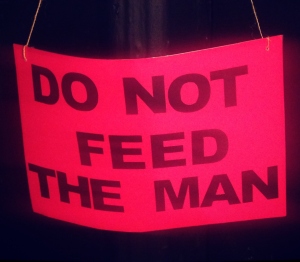 It’s always a thrill when I discover one of my plays has been performed north of the border. ‘Socks Go in the Bottom Drawer’ had another airing in Scotland, this time in the town of Lauder (ashamed to say I had to get the atlas out and find it – just above Galashiels). Thank you to Lauder Amateur Dramatic Association for giving it a four night run in March, and thank you to Comedy Plays for bringing the play to their attention.

If you’re a playwright who is happy for your work to be performed by amateur actors, do check out the possibilities at: www.comedyplays.co.uk/

The Princess Monologues are back!

It’s your last chance to catch Eleanor Dillon-Reams’s 5 Star performance in The Princess Monologues this Friday at the Bread & Roses Theatre, Clapham. 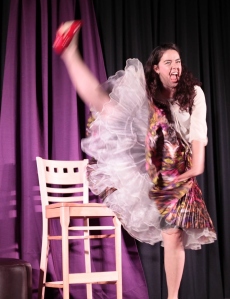 Goblin Baby Theatre Company’s production has already played at The Bedford, Balham, The Hen & Chickens, Islington, The Space, Isle of Dogs, and returns to the Bread & Roses, 68 Clapham Manor Street, SW4 6DZ for a final performance at 8pm on February 12th. To book tickets, please click on the following link: www.goblinbaby.com/princess

Each monologue explores a different aspect of being a ‘princess’ in the 21st century from an African royal, a DisneyWorld employee and a drag Queen, to a young abused mother, a boy who dreams of finding his prince and a revenant Princess of Wales.

Dynamite II by Tilly Lunken, Just a Girl by Tina Jay, Home Made Princess by Simon Jay, Mr Andersen’s Princess by Amy Bethan Evans, Hail Your Majesty by Tessa Hart, #Shame by Eliza Power and my play Princess Frankenstein were all commissioned by Goblin Baby Theatre Co, an activist theatre company which has been making waves in south London since they launched two years ago.

I was thrilled by Eleanor’s cut-glass rendering of my monologue about medical student Frankie, who is a genius in the lab but a picky princess in love. Can she surgically create a perfect boyfriend?

“Princess Frankenstein has an incredibly dark humour, which had the audience in stitches.” RemoteGoat.    “Princess Frankinstein is genius, strange  and a little unsettling, as well as being hilariously funny.” Female Arts.    “Can she surgically create the perfect man? No, it turns out, but not before leading us through a hilarious tour of her struggling love life. It’s almost an exploration of what it means to be human in ten too-short minutes.” London Theatre 1.     “Princess Frankenstein is a darkly comic gem: one of the funniest things I’ve seen all year.” Angela Clarke.

But don’t trust the reviews. Go and see the show yourself! 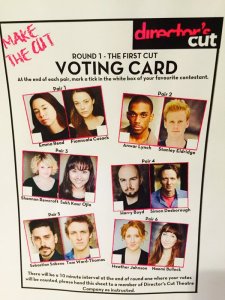 Director’s Cut pulled off an adventurous evening of acting and writing talent on Tuesday, with its ‘Make The Cut’ slam at London’s prestigious St James Theatre.

It’s always a privilege to have a play performed by up and coming young actors. This time, not one, but two, got to interpret the role of Kips in my play ‘Sperm Vampire’ along with nine other monologues, also performed by more than one actor.

The monologues were selected from among hundreds submitted to the company.  Each play was performed twice, by two different actors.  Each actor got to learn three different monologues.  The first round comprised all 12 actors going head to head in pairs, performing six of the shortlisted plays.  The audience then got to vote who went forward. The six winning actors  then went head to head in three groups of pairs, performing a new monologue.  The final round saw three actors performing the final monologue. 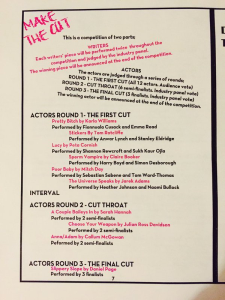 Simon Desborough and Harry Boyd both gave sterling performances as Kips in ‘Sperm Vampire’ by Claire Booker. A big thank you and congratulations to them both for their excellent interpretations.

Congratulations also to all the short-listed writers, the other ten actors and mazeltoff to the ultimate winners, actor Sukh Kaur Ojla and writer Tom Ratcliffe.

If you would like to know more about The Director’s Cut Theatre, including future writing or acting opportunities, please contact Heather Ward (Artistic Director and Producer) at: www.directorscuttheatre.co.uk or on Facebook at:  https://www.facebook.com/directorscutTC

MMMmmm, luscious cover and when you open it – what an assortment! So many melt-in-your mouth fabulous poems and short stories to choose from. 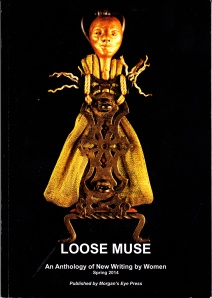 It’s Loose Muse’s fifth anthology – triple-launched in London, Manchester and Cornwall and celebrating the creative talents of 50 women British and international writers aged between 20 and 91!

I’m lucky enough to  have had three of my own poems included, together with my short play ‘Enemy’ (set on the Russian Front in 1943) which was performed at The Lost Theatre Company’s 5 Minute Play Festival last December.

Loose Muse is London’s only regular women’s writers night which has been running continuously since 2005 at The Poetry Cafe, Covent Garden, London. It meets at 8pm on the second Wednesday of each month (except August). It offers a friendly and fun atmosphere for women to perform open mic. Men are always welcome to make up the audience!

To buy copies of the latest anthology (or back-copies of the previous four) go to: www.loose-muse.com or contact Agnes Meadows at agnespoet@gmail.com The anthologies are also available to read in the reference section of The Saison Poetry Library in the Royal Festival Hall, South Bank, London.

The anthology’s front cover artwork is ‘Dismantled’ by Lorraine Clarke, who has also designed all the previous Loose Muse covers. 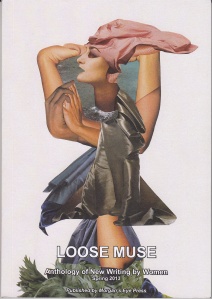 And only days after a lively launch party at Cotton’s in Clerkenwell, the All Woman Writers’ Night spread its wings and flew north to Manchester for the first of (hopefully) many Loose Muse events organised in that city by local poet and activist Steph Pike. Guest performers invited to Manchester included Agnes Meadows and Claire Booker. 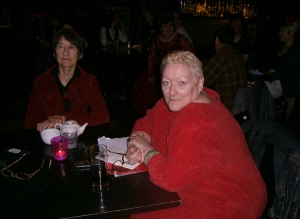 Thanks to the sheer get-up-and-go savvy of Agnes and her editorial team, the Loose Muse anthology is packed with an eclectic mix of contributions from writers across the UK as well as Greece, Spain, Holland, Finland and Australia.

Celebrating her ninth year as Loose Muse co-ordinator and host, Agnes Meadows is rightly proud of the anthology: “It’s a diverse mix of high quality poetry, short stories and short plays, clearly showing that women can write with strength, passion, humour and imagination.” 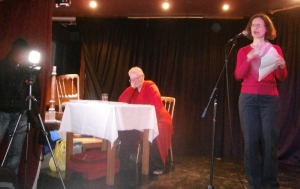 My own contribution includes a 5 minute comedy called ‘Last Man in Watford’ set in a (dystopian?) future when women rule the world and the few remaining men are exhibited in zoos!                                     To order copies of the anthology (published by Morgan’s Eye Press) or to find out more about Loose Muse events in London or Manchester, please contact Agnes Meadows at agnespoet@gmail.com or ring her on 07789 901 667.  You can also check out the latest updates on Loose Muse by clicking the following link: http://www.loose-muse.com 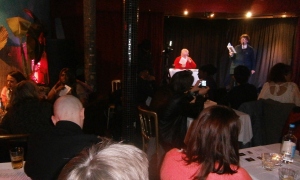 The Good Ear Review is a great site for short, thought-provoking monologues.  Check out my latest monologue about a couple’s morning ablutions ( ‘Alleluia’ at www.thegoodearreview.com)

You’ll have to scroll down to find mine, as each monologue gets its 10 days in the sun, before being overtaken by the next, etc etc.  They then all get archived!  Type ‘Claire Booker’ in the search box and it’ll take you straight there.