For the second year running, I have a poem in the Genius Floored Anthology published by Soaring Penguin Press and supported by the Poet Laureate, Carol Ann Duffy. 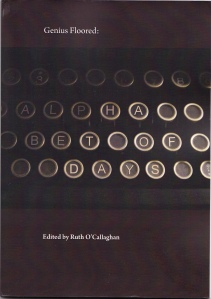 Edited by Ruth O’Callaghan, the anthology raises money for cold weather shelters in London and this year offers another great spread of poets, including Mimi Khalvati, Maureen Duffy, and Anne Stevenson.  My poem ‘Turning Point’, is a modern sonnet about emotional survival set in a garden centre.